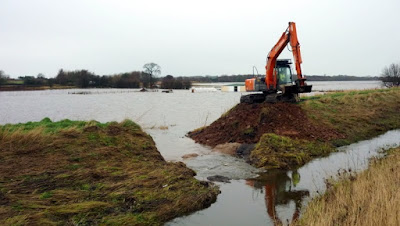 I am pleased to say that I have some good news.

The Environment Agency started working on repairing the Ellerbrook bank yesterday. Although there is still lots more work to do yet I managed to be there when the gap was plugged and water finally stopped running into the field. I have to praise the E.A. team that have worked on the bank. We will have had over 200 tonnes of clay poured into the gap so far together with a few tonnes of sand bags. 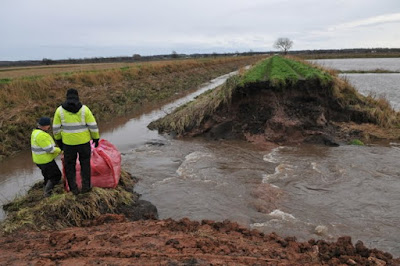 The Ellerbrook bank consists of a clay core with a compressed earth covering. The repair will be made completely of clay which is being brought in from Hambleton over on the Wyre. 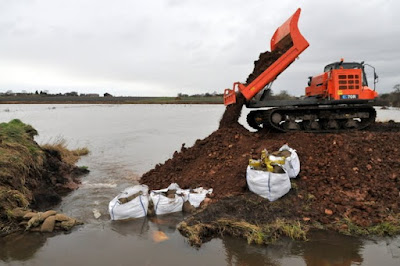 I have asked the E.A. team what the cause for the breach was but we can only speculate really. You cannot get away from the fact that sheer volume of water put a massive strain on the bank. Moles or rabbits can cause holes in the bank that can weaken the structure. Another cause can be the 'topping' of water over the bank, Water that flows over the top of the bank rapidly accellerates as it flows down the outer side of the bank. It can quickly wash away the turf covering exposing the soil layer below which is then quickly eroded. If the water keeps flowing, the bank will become weak enough to loose strength and fail. There is evidence that this process has taken place in another section of our bank closer to the bridge and also further down on another field towards the River Douglas. 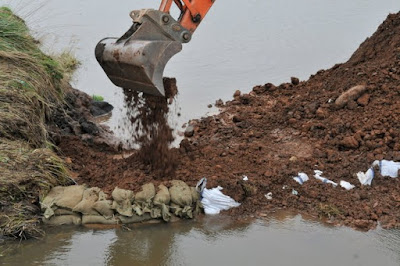 Seeing the flow finally come to rest was a minor 'moment' I suppose. As it happened Rob from the E.A. turned to me and gave me the thumbs up. At last. My hope now is that rain will stay off long enough for them to get some more clay in to build the bank up to full height before it all gets washed away.

Rob said that in the summer they will probably come and dig out the sandbags to replace them with more clay which they will compress down.

So, we only have to wish you a happy new year. Here is a memory of happier times when crops were ready and bees were buzzing. I am looking forward to these times again next year. 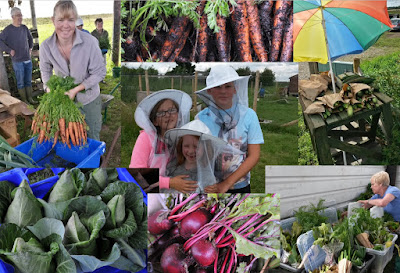 Posted by Neil Hickson at 21:14 No comments:

As I watched the field rapidly fill with water on Boxing Day and all the things we had built over the last two years become engulfed with water from the Ellerbrook, it was difficult to imagine how anything would survive. The small pallet fenced enclosure that surrounded the beehives gradually disappeared below the water and I thought that was that.

We had five bee hives on site, three with active swarms in them. We knew it had been a good year for honey production but we left the honey for the bees to eat during the winter as two of the hives were new colonies.

We all became excited the following day when one of our beekeepers, Andy Becksmith, said a hive had been found on the banks of the Ellerbrook. He met a couple who had seen it floating on its back in the water and had pulled it to safety. When Andy got to the hive, amazingly  bees were flying in and out.

It seems, because the hive had been ‘strapped up’ for the winter, it all stayed in one piece and floated on its back like a raft through the water. If the hive had tipped any other way than on its back, it would have filled with water and all the bees would have been drowned.

He planned a rescue operation the next day and returned to recover the hive.

The hive has now been taken to the garden of Andy’s father-in-law a few miles away. Andy said, “There was a good handful left, approx 200 bees. The hive has been rebuilt and dried out where possible. We fed the bees and will carry on doing so for couple of weeks. They stand a reasonable chance but will need supporting. Hopefully the queen is intact, it will come down to the weather and how long winter lasts. Hopefully they can return to the field in spring."

Andy has since managed to recover another one of his hives but this one didn’t have the same luck. Andy told me, “To put it in perspective the hive that didn't make it had 50,000 bees in it and 30lb of honey, this honey will be fed to the surviving bees.”

Like some of our chickens, it seems that the smallest of animals can also be amongst the toughest.

Keep track of our progress by receiving our newsletter. Please sign up here, you can opt out at any time.

Posted by Neil Hickson at 09:32 No comments: 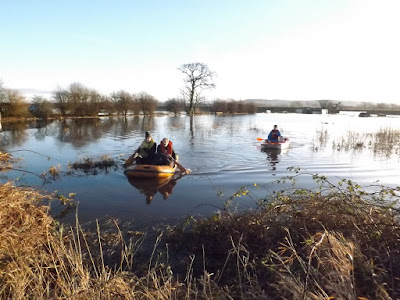 A small amount of good news was salvaged yesterday though. One of our members brought two small two man dinghy’s to site. Four of us saved 13 chickens that had managed to cling onto life on top of their floating coup and other floating debris overnight. These are now at home in the garden of our organisations secretary.

Finally, a member of the public saw one of our bee hives floating on its back and managed to drag it onto the riverbank. We found it yesterday afternoon with bees flying in and out of it and plan to move it today to a safe location. We would have done this yesterday but our bee handling kit is also floating around in our shipping container.

If you would like to support Organic Veg Club please sign up for our newsletter here.
Posted by Neil Hickson at 15:59 No comments:

What Shall We Call The New Lake? 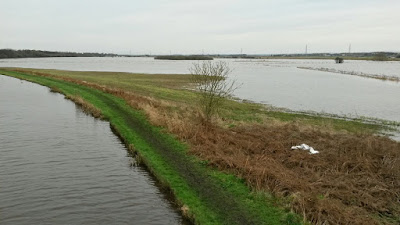 The new one mile long lake that has appeared between Burscough and Rufford should perhaps have a name. Have you any suggestions? This picture was taken from the top of the canal bridge looking towards Rufford and Mawdesley.

If you would like to support Organic Veg Club please sign up for our newsletter here.
Posted by Neil Hickson at 13:34 No comments:

I don't know who filmed this video but it ended up in my inbox, so thank you to the person who sent it. It shows how big the gap in the bank is and why the field filled up so fast and to such a great depth. This hole was blasted through under massive preasure when the water in the Ellerbrook was flowing over the top of the bank. You can imagine if someone was on the field at the time the danger they would have been in. I understand that this was shot yesterday (27th of December) and the water is keeping on flooding in with some force.


If you would like to support Organic Veg Club please sign up for our newsletter here.
Posted by Neil Hickson at 09:13 No comments:

The last two days have had a devastating effect on Organic Veg Club. The collapse of the Ellerbrook bank filled our farm with 5 feet of water which then went on to cascade across Meadow Lane and flood fields all the way to Rufford.

Two years ago we started Organic Veg Club, a community farm based in between Rufford and Burscough.

On Saturday at approximately 11:40am (26th December 2015) The Ellerbrook, a tributary of the River Douglas, burst its bank and flooded our 8 acre field. The wall of water filled the field to between 5-6 feet in depth. It then cascaded across the road, turning it into a 2 foot deep weir carrying on flooding fields downhill from us. There is now a mile long lake from Meadow Lane in Burscough all the way down to Rufford. Many other farmers now have crops under water, one said he will lose in the region of £150,000 worth of crops.

During the flood, 2 years hard work from Members of Organic Veg Club were washed away. We lost 32 chickens and ducks, (some of which were rare breed Marsh Daisy's and Scots Dumpys). Three beehives and all our remaining crops were washed away. We have planted over 1500 trees on site with more to go in this winter. All our tools and equipment are in an inaccessible shipping container that is sat in 4 feet of water. Yesterday we rowed a dingy into the barn we were in the process of finishing off last week as it had five feet of water in it. The top 3 feet of our poly tunnel is visible over the waves.

Here are some images taken over the last 2 days. 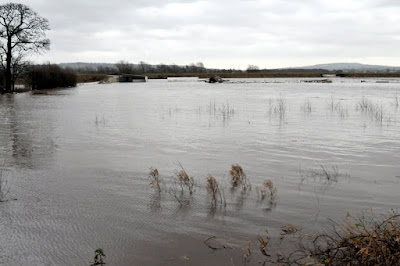 Another Wall For The Barn 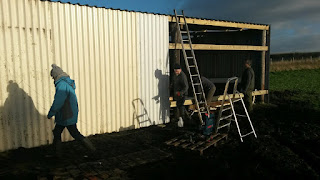 Thanks to our brilliant  volunteers another wall goes on the barn today.
Sent from Samsung Mobile on O2
Posted by Neil Hickson at 19:28 No comments: 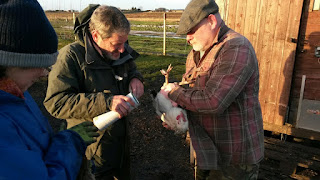 Today we gave our chickens another Red Mite treatment.
Posted by Neil Hickson at 17:53 No comments: 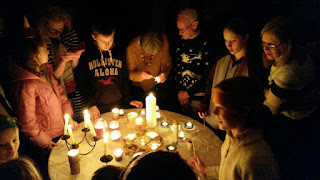 Sent from Samsung Mobile on O2
Posted by Neil Hickson at 08:08 No comments: